Last summer, my boss and I decided it was time to get rid of our painfully slow Acer laptops and buy something more up to scratch. The Santa Rosa chipset being the new kid on the block at the time, we opted for the new MacBook Pro from Apple. Very nice choice. They come standard with 2GB of RAM, which seems nice at first. Until you install Vista on it... and play a lot with VMWare Server or MS VirtualPC. 4GB would have been much nicer, but how not to shy away from Apple's 600€ premium when ordering online? Crazy prices... So the MacBook Pros were ordered with the standard 2GB of memory, as a start.

After a few months of use, they are really nice pieces of hardware, but what if we had chosen for those missing 2GB of RAM? ;-) DDR2 prices being so low at the present time, why wait longer for an upgrade? So, I checked the other reputable makers of RAM for advice on what to put in a MacBook Pro. Corsair and Kingston, the two online advisers I tried, both recommended specific items for the Mac, at a higher price naturally... But if the MacBook Pro has an Apple-designed motherboard, it relies on a standard Intel chipset. Why would a different kind of memory be needed? So I took the plunge and ordered several 2GB memory modules from the Kingston ValueRAM stable, DDR2 PC667, CL5, 256Mx64, 200Pin, 35€ each, on ComputerUniverse, excluding VAT. And guess what? I works like a charm.

The memory check in Vista's boot menu doesn't detect any error, and the system is much more responsive. I'm running Vista x64 Ultimate, and it kicks ass :-)

Email ThisBlogThis!Share to TwitterShare to FacebookShare to Pinterest
Labels: Computers WWF at the European Motor Show The pictures of the last WWF action at the European Motor Show in Brussels are up!

A bit more about the Tesla Roadster

Take a Lotus Elise, swap the engine with an all electric motor and you get...

Is being a car buff and ecologist incompatible?

The future looks promising... Thanks to several companies, we will be able to drive fast without poluting too much ;-) 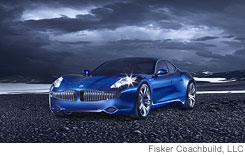 Email ThisBlogThis!Share to TwitterShare to FacebookShare to Pinterest
Labels: Environment

Email ThisBlogThis!Share to TwitterShare to FacebookShare to Pinterest
Labels: Cars

Email ThisBlogThis!Share to TwitterShare to FacebookShare to Pinterest
Labels: Cars

Nice article from National Geographic about a better source than corn for producing ethanol:

Ethanol made from a prairie grass shows promise as a viable fuel that could be much more environmentally friendly and energy-efficient than corn ethanol, a new study says.

Email ThisBlogThis!Share to TwitterShare to FacebookShare to Pinterest
Labels: Environment

The other day, I got awaken by the dreaded beep of the RAID controler on my home server. One of the disk had failed. Not a problem I thought, RAID5 is supposed to cope with such issues. I launched the RAID management interface to know more about the problem, and clicked on Rescan. The computer seemed frozen for a minute or so, and the beep stopped. Afterwards, the failed disk got recognized again... until I clicked on rescan a second time. Big mistake. Two disks got flagged as failed and the array got disabled... After a reboot, the array was split in 2 identical arrays (same size, same name) but one with the first 6 disks, the other with the failed 2, both disabled. Only option presented by the RAID BIOS (hpt374): delete array. Not en option, as I didn't have any backup of that storage...
So, I stopped the computer and emailed the support, without much hope. To my great pleasure, I got a reply back, with a tool that would allow me to reconfigure the array as one entity, and access it again. And it worked :-)
So, I must say I'm very happy with Highpoint support, their answer was fast, precise and to the point. I already had issues with a Promise item and received nothing valuable from their support (asked to reboot and closed the call)...
Two thumbs up to Highpoint support!
at 1/08/2008 11:26:00 PM No comments:

Email ThisBlogThis!Share to TwitterShare to FacebookShare to Pinterest
Labels: RAID

The WWF has a cool tool to help you measure how many resources you consume, and gives you tips on how to reduce your impact on climate change.

Email ThisBlogThis!Share to TwitterShare to FacebookShare to Pinterest
Labels: WWF I spent some time figuring this out, so this might be useful to someone else...

Mission: access a WinDev DB through ODBC from a C# Web Service

Thanks WinDev for making our work so complicated... The voluntaries of WWF Brussels have wandered around the city this 27th of December 2007 to distribute leaflets to people, wishing them an happy new year, and asking them to be more "eco-friendly".
-
More pictures on my site or on indymedia.
at 1/03/2008 05:23:00 PM No comments:

Welcome to my blog.

You can find more info about me here, and about my passion, photography, here.